Fast Dispatch from US, EU Local Warehouse for Free

Two lucky customers will get 100% refund. Try your luck now!

Ⅰ. The performance of the gray scale of the laser engraver

Ordinary mechanical engraving can't engrave points of different thickness in an economical way, so it does not have a grayscale expression. The laser engraver realizes the engraving by dotting, which has a natural advantage in grayscale performance. For this reason, grayscale expressions are used as much as possible in the engraving design. This has the advantage of reducing the coloring process and saving costs; on the other hand, it enriches the expression methods of engraving and increases the level of graphics. When the user uses it, first fill in different grayscales in the graphics (the text needs to be converted to graphics first), and select the black and white mode for the engraving output. You can try the effects of different dots with accuracy generally not more than 500dpi. 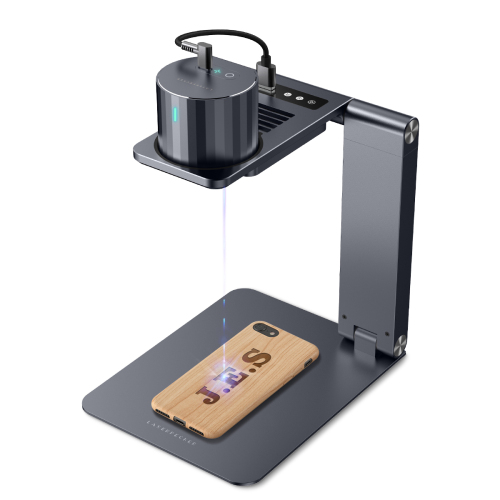 Wood is by far the most commonly used laser processing material and is easy to engrave and cut. Light-colored woods like birch, cherry or maple are easily vaporized by laser, so they are more suitable for engraving. Each kind of wood has its own characteristics, and some are denser, such as hardwood, which requires greater laser power when engraving or cutting. It is recommended to study the carving characteristics before carving unfamiliar wood.

Engraving on plywood is actually not much different from engraving on wood, but there is one point to note, the depth of engraving with a laser engraver should not be too deep. The edge of the cut plywood will be as black as wood. The key is to see what kind of wood is used to make the plywood.

Generally speaking, the carvings on wood are usually intaglio, and the carving depth is generally deeper. The power is generally set higher, if it encounters harder wood, the color of the engraved graphics may become darker. If you want to make the color lighter, you can increase the engraving speed and try engraving several times. Some wood will produce some oily fume attached to the surface of the wood when engraving. If the wood has been painted, it can be carefully wiped off with a damp cloth. If it is not painted, it may not be wiped clean, causing the surface of the finished product to be stained.

The laser engraver generally does not cut wood deeply. The maximum cutting depth depends on the material and the power of the laser. If you want to cut very thick wood, you can slow down the cutting speed, but it may cause the wood to burn. In the specific operation, you can try to use large-size lenses, and use the method of repeated cutting.

After wood carving, there will generally be a feeling of being burnt. It has a primitive artistic beauty that matches the wood background color. The depth of its color mainly depends on the laser power and the carving speed. But some woods are usually softer, and you can't change their color anyway (such as birch). For the coloring of the finished product, acrylic pigments can be used.

This type of MDF is the kind of wooden pallet that we often use to make signage liners. The material is high-density board with a thin wood grain on the surface. The laser engraver can engrave on this kind of material, but the engraved pattern is uneven and black, and generally needs to be colored. Under normal circumstances, you can use a 0.5mm two-color plate for inlay to get better results through proper design.

Some MDFs are specially designed for laser engraving, and the engraved patterns are even in color and have good results without coloring.

Acrylic paint or alkyd paint can be used. When engraving, the color of the graphics can be set to 60% gray level, so that the bottom surface of the engraving is a little pitted to improve the adhesion of the color.

Two-color board is a kind of engineering plastic specially used for engraving composed of two or more layers of colors. Its specification is generally 600*1200mm, and a few brand specifications are 600*900mm. The variety is complete and it is recognized as the best product. The engraved two-color board is usually used for various indication signs and badges. The two-color plates can be divided into two categories: mechanical and laser. Some of the mechanical plates can also be used for laser engravers.

If a laser engraving board is used, the effect will be very good, with obvious contrast and clear edges. When using a mechanical plate with a thin surface, the engraving effect is not much different from that of a laser plate. If you look closely, the edges may not be as clear as the laser plate. On a two-color board with a large contrast (such as a blackboard), engraving grayscale images can be designed. After a large number of engravings, the two-color board itself may be deformed. It can be leveled by hand after heating with hot water.

Under normal circumstances, the user will ask you to cut the two-color plate, if you are using a laser plate at this time, you can cut it after engraving. Pay attention to the speed which should not be too slow and cut through at three or four times instead of one time, so that the edge of the cut material is smooth and without trace of melting. When engraving, the power should be just right, not too big to avoid melting marks. If you use a mechanical board, you can only cut it to a depth of 50%, then break it by hand and then use sandpaper to smooth the edge. If you have a mechanical machine, you can cut it on the mechanical machine first, and then engrave it on the laser engraver.

If the user's requirements are not high, the dots can be used to express the different colors in the logo. If you have to paint, you must engrave the painted area deeper. Acrylic paint or alkyd enamel can be used. Other paints may damage the surface finish of the two-color board.